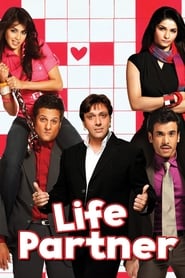 The film is about three close friends, each one having a different perspective about marriage. Govinda plays a divorce lawyer in the film who doesn't believe in marriage and is a Casanova of sorts. Khan plays a character for whom being in love matters most and D'Souza plays his love interest. Kapoor plays a Gujarati who believes in the system of arranged marriage and Desai plays his Gujarati wife.